I am playing with monotypes these days in art class. What is a monotype, my loyal followers may ask? Basically it’s a method of printing which results in just one unique print per inked plate, as opposed to multiple prints being pulled off one plate. I paint directly on a glass plate or completely ink the plate with a brayer. Then I place paper on top of the plate and draw a picture on the paper. The pressure from drawing with a pencil pushes through to the inked plate. After using a printer’s baren to further push the ink onto the paper, the paper can be peeled off the plate to reveal the print. That’s it. The drawing is then gone from the plate, so no other copy/print/edition can be made. Except the ghost.

The Ghost: You can put another piece of paper on the inked plate, press down with the baren, and pull up a lighter version of the image which is called a ‘ghost.’ There are lots of variations to this technique, but I’ll stop here to show you a few of my first monotypes. Some are unadulterated originals, some are ghosts, some are altered with Conte crayon after they dried. The snail is a ghost print enhanced with Conte crayon. On the black sheet below, you can see that the first print was so dark, you can barely see the snail drawing. In this case, the second print was much more clear, but some details were lost. His antenna needed to be touched up because they had faded like pale eyebrows. I think a snail needs bold antenna. 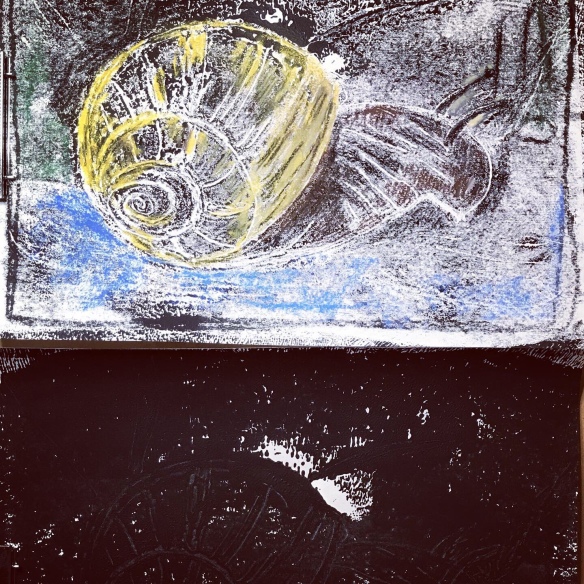 Now that you are completely clear about monotype printing, you know which print below is the original and which is the ghost, right? 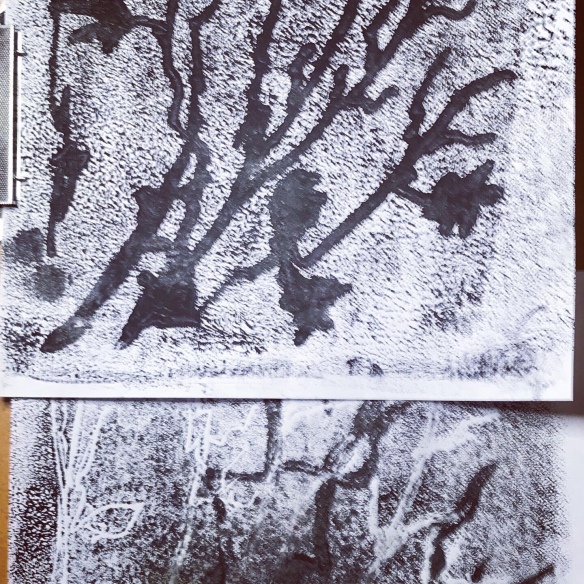 Monotypes result in lots of happy accidents. It’s a method of printing that seems to me to more spontaneous than etching, engraving, lithography and others. The textures created by the ink are beautiful and I tried to leave them alone. If you want to try printing, but you don’t have a press and lots of equipment, try monotypes.

Below, I am trying to turn an abstract into a fantasy bird. The chest design was created with inked bubble wrap on the printing plate. The white shapes were created with random card stock shapes placed on the plate. The resulting print was abstract, but I could see a Phoenix trying to take flight… he emerged from the acrylic ooze.